I’m setting out to pedal my bike for about 600 miles.  Yeah, that’s right, I said 600 miles.  Well, give or take a few, depending on schedules, weather, the phase of the moon and how often I feel like washing my hair.  Wanna guess where I’m going?  There are a few places I might like to visit within about a 600 mile radius of my home.

Maybe I’m heading north.  I could put that passport to use and get myself a little further into Canada than that time I visited Frelighsburg, maybe head to Montreal or Quebec City.  Or maybe I’ll go west-ish.  How about Ann Arbor? I’ve always liked the sound of that place.  Then I could get myself one of those “Smitten with the Mitten” Michigan shirts and swing by a great lake.  Nah, though.  Probably extra cold in both those directions.  I should head south.  Maybe hit Myrtle Beach or somewhere on a Carolina coast. It’s a wee bit warmer there than where I am, and then I could gaze at the sunrise without my arctic tundra coat.  Options… 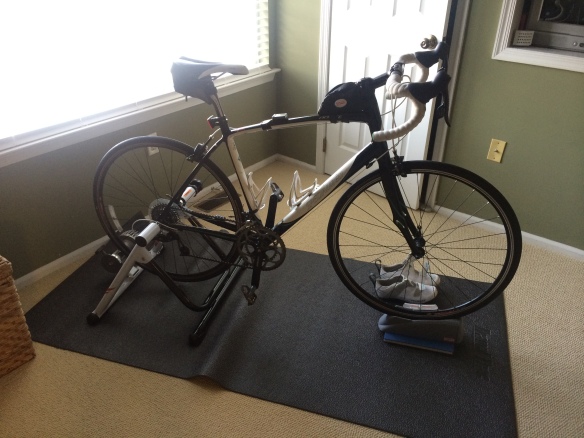 NOWHERE!!!!  Nowhere at all!  Not moving even one inch. Not leaving my house. Just gonna try to pedal in the same exact spot for 600 miles. Ish.

Two summers ago I started doing a long distance charity bike ride with my dad. We ride 65 miles, with lots of other good people, from the middle of a city right out to the beach. Both summers I’ve had to cram in the training once the weather broke and school let out.  I’m a teacher and so summers give me some more free time for riding.  Both times I’ve made it just fine (Thank you, God!) albeit a little sore, but I’ve been wondering how I’d feel if I was in a little better shape for it.  So my plan this year is to keep my legs moving on a bike trainer through the rest of the winter.  And because I like to set goals as motivation, I’m aiming to ride approximately 600 miles by the first day of spring.  When I did the initial calculations, my plan was to average about 45 miles a week, riding about 3 days per week.  Here’s where we stand now. 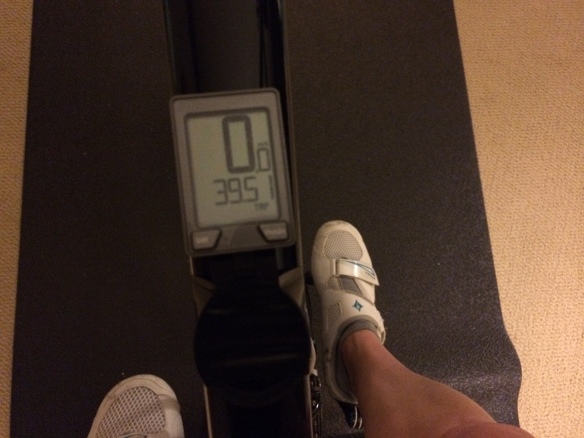 I’ll resist the urge to assign you a math problem and just tell you that I’m a tad behind. Don’t stay up all night worrying about it though.  I’m not.   We have time.  If we get a snow day, I’ll just double up.  Quadruple up.  Whatever.

On a slightly separate yet somewhat related note, here’s a little something to ponder if you should find yourself on a bike trainer for a few days.  And you ARE going to need something to ponder, or listen to or watch, because, I don’t like to use the word boring, but it’s kind of boring.  Anyway, my friend and fellow blogger recently wrote about worrying and likened it to a rocking chair, “…it will give you something to do, but won’t get you anywhere.”  I get her point, and totally agree.  Just the same, I gave her a little raz about it.  “If worrying and rocking chairs are pointless because they don’t get you anywhere,” I said, “then what does that mean for my bike trainer?! I could be to Canada for all that pedaling to nowhere!” I was just teasing.  We laughed about it, but you know what, the more I pedal to nowhere, the less worrying I do.  Rocking chairs don’t have the same caloric-emotional-velocity-ratio.  That’s not a thing.  Just go ride a bike!

You don’t even need a helmet inside! Pedal happy!