…”Beer is proof that God loves us and wants us to be happy.”  Amen.  I like beer, especially craft brews and drinking the local beers of wherever I happen to be.  Alaska has some good ones! But, lucky for me, I don’t have to travel that far to get some tasty brew.  I can even ride my bike to two of my faves!

This pretty path leads to fun towns with good restaurants and BEER!  We call it the “tow path.”

River Horse Brewing Company is in Lambertville, NJ, right on the bank of the Delaware River,  just a short distance from this biking trail.  I went with a few friends back in the fall when they had just released their “Hipp-o-Lantern” Pumpkin Ale. They’re into the hippos there.  River Horse = hippo.  At the brewery they usually have 3 or 4 beers on tap, one or two seasonal beers and then some of their standards, like maybe the “Hop-A-Lot-Amus” Double IPA.   For a buck or two you get 4 tastings.  I’ve been here twice and both times I was wishing that I could order a whole pint or bottle but they only do the samples.  It’s probably better that way because some of these brews are pretty potent.  They also give tours of the brewery but I’ve never done that.

If you did want a whole glass of beer, which we did, you could walk back out to town and across the bridge that spans the Delaware River and connects New Jersey and Pennsylvania.  Just up the hill on the PA side you’ll find Triumph Brewing Company.  Triumph has locations here in New Hope and also in Princeton and Philly.  My standard here is their Honey Blonde which is pretty light and easy to drink. Jenna, up there, goes for the Amber Ale. I like to try their seasonals too.  My fave seasonal is their Raspberry Wheat.  Can’t wait for summer time to pick up a growler of that!  Triumph is a brewery and also a restaurant with some pretty good food.  So when my girls and I went for some brew we filled our tummies too.  And look what happened… 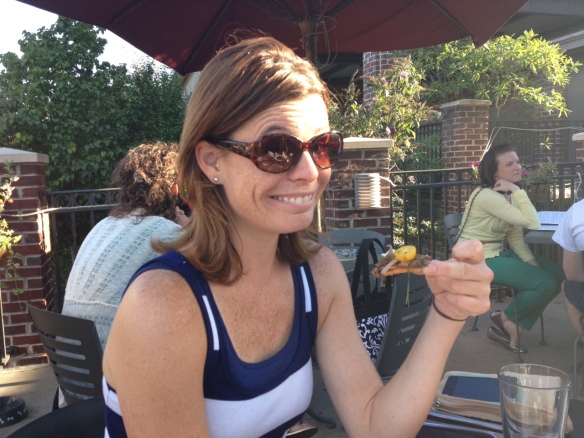 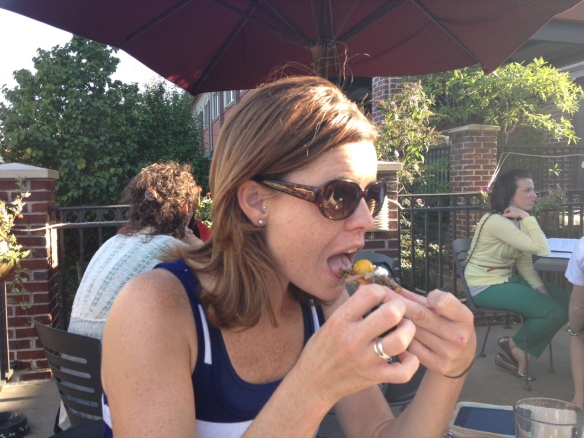 I was not into it.  I was more concerned with the setting sun, because next thing we knew the bike trail looked like this and the ride home was a lil dicey…

Where’s my head lamp when I need it???

A few weeks later we went to The Vault.  It’s a new brewery in Yardley, PA.  These guys renovated an old bank and turned it into a fun brew pub. It looks pretty cool inside and definitely feels like an old, fancy bank with tiled floors and bars and, well, vaults.  They serve pizza and tapas and play jazz music.  Sometimes they have live performances.  I’m not super into jazz music but I really liked the beer! We got the flights so we could try out a few…

That one on the left is sweet potato ale! I was a little skeptical but it was good like cinnamon and nutmeg and fall! Yum!